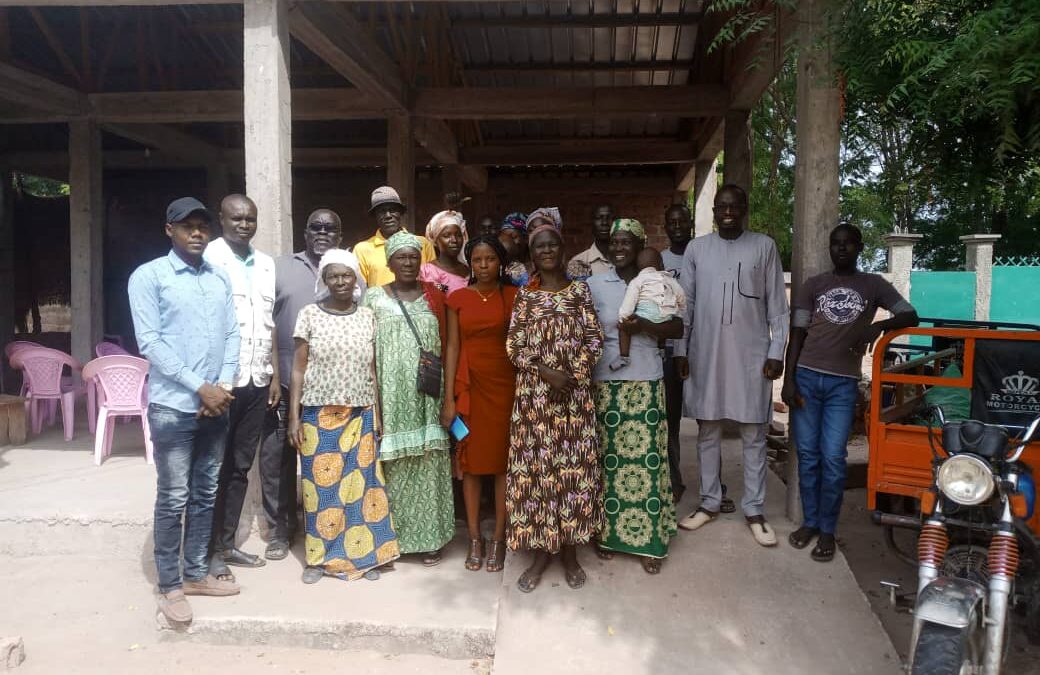 Workshops for the dairy chain in Cameroon

At the end of the year we held a training workshop for Cameroonian milk producers, collectors, transporters and processors, as part of the project “Support the implementation of an integrated Water-Energy-Livestock project for the Dairy Value Chain in the municipalities of Petté and Wina”. This workshop is the result of a diagnosis, recognition and mapping of the main actors involved, directly and indirectly, in the dairy value chain of these two communities in northern Cameroon.

The workshop, in addition to presenting good and best practices for the collection and preservation of fresh milk, aimed to propose the main actions and milestones, as well as the objectives for 2023. The main objectives include: (1) provision of a building by the municipality of Petté, to host the first pilot milk storage, (2) delivery and installation of the first refrigerated milk storage unit in Petté, with solar energy, and (3) sensitization of stakeholders for the implementation of the unit and the constitution of the management team and consultation framework. 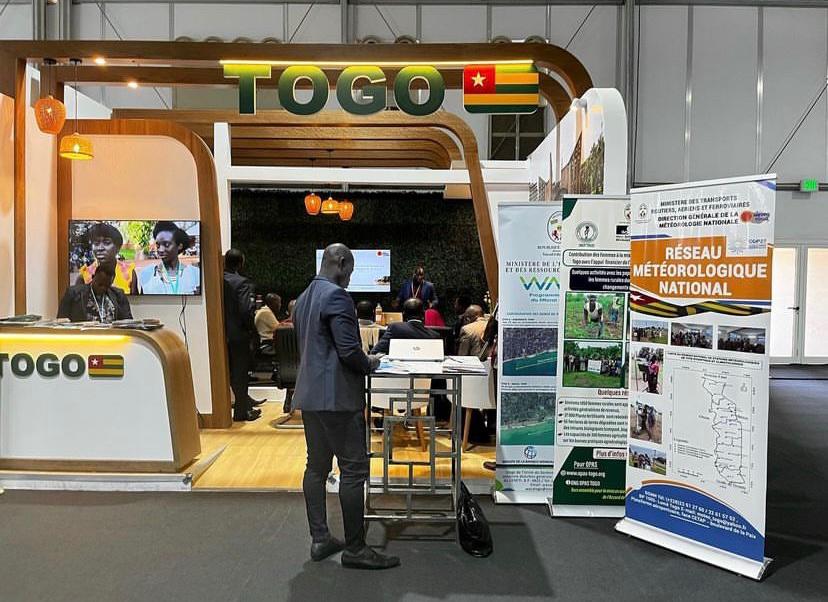 For the first time, OIKO participated in COP27 and we had some great moments. We were able to showcase two of our nine ongoing projects and establish valuable relationships with organizations and governments that share OIKO’s objectives: to help the most vulnerable communities face the risks of climate change and promote sustainable development for the planet.

On the one hand, we had a side event with more than 100 attendees in person, where we presented the context, progress, results and expectations of the project in Togo, which aims to improve the resilience against climate change effects, reinforce agricultural practices, facilitate technology transfer and provide an answer to the current challenges regarding climate change mitigation. The event was attended by Miguel Trillo, CEO of OIKO, Raul Pantaleo, co-founder of TAMassociati, Kouassigan Tovivo, director of Climate Analytics, and Esso-Kl’nam Pedessi, executive director of Jeunes Verts, who have been our partners during the implementation of the project. What stood out most about our side event were the criteria taken into account for the selection of the communes, and how this model could be replicable in similar areas of Togo and the region.

On the other hand, together with the Caribbean Community Climate Change Centre (CCCCC), the Caribbean Development Bank, and the Green Climate Fund, we held a project event in the CARICOM region that seeks to develop an appropriate comprehensive Implementation Plan, a Financing Strategy, an M&E Framework and the re-establishment of a RCCCC towards the operationalization of Climate Change and the Caribbean.

Undoubtedly, COP27 was an enriching experience that will allow greater visibility of the purpose of the assignments being carried out in different countries around the world. 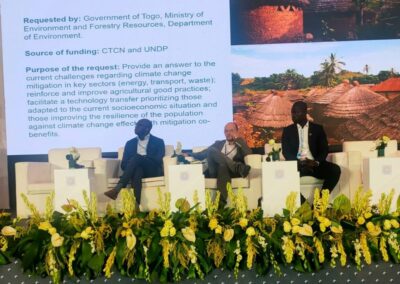 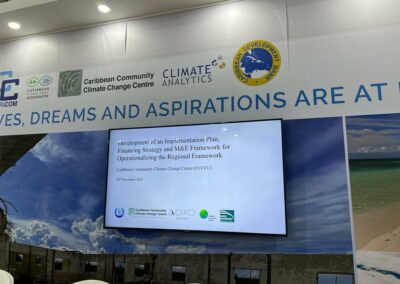 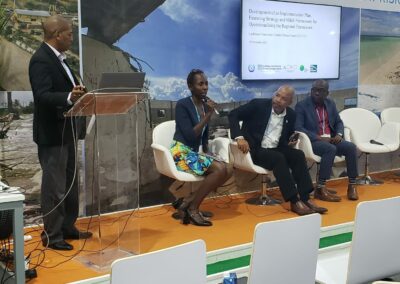 As part of the project “Technical Assistance for the development of a methodology to create climate-smart communes in Togo and formulate 4 mitigation and adaptation action plans”, we are developing in alliance with Jeunes Verts and Climate Analytics, we have conducted a capacity building workshop for the representatives of 10 communes. The main goal of the workshop is to strengthen the capacities of the executives (technicians and planners), on the themes and methodological approaches necessary for a better consideration of climate change in the processes of communal development and development of climate action plans at the communal level.

The first day was led by Climate Analytics, who, through their experts, presented the methodology for the creation of vulnerability matrices to climate change and the socio-economic profiles of the communes: Commune Lacs 1, Communeyoto 2, Commune Agou 1, Commune Kloto 1, Commune Tchaoudjo 4, Commune Mô 1-Djarkpanga, Commune dankpen II, Commune Keran 1, Commune de l’Oti-sud 1 and Commune de kpendjal 1, all of them in located in different regions of Togo.

This Technical Assistance seeks to develop climate change adaptation and mitigation plans for these communes, specific to their context. For that, our team of experts have developed a conceptual framework for climate-smart communes with all the stakeholders and have created vulnerability assessments. The integration of digital climate information delivery services into the definition of climate-smart villages and the elaboration of a model of transformation for the communes to improve their resilience, are also part of the main goals of the assignment. 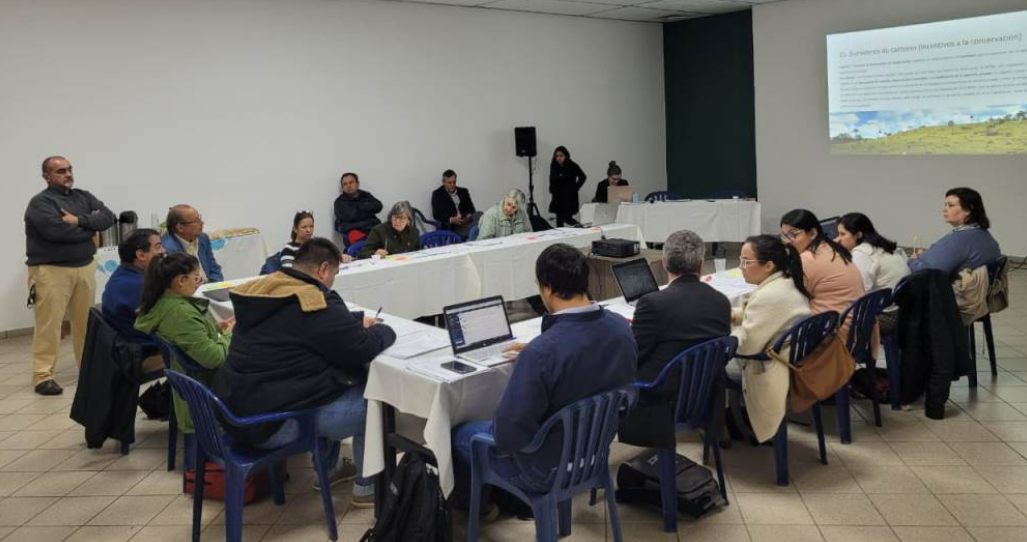 Through a partnership with Fundación Moisés Bertoni and Investigación para el Desarrollo (ID), and the support of the Ministry of Environment and Sustainable Development (MADES), OIKO has conducted a series of workshops within the framework of the UNEP/CTCN project “Provision of Technical Guidance and Support to conduct a Technology Needs Assessment and a Technology Action Plan for Paraguay”.

In the workshops we have had the participation of the main actors of the sectors involved in the Nationally Determined Contributions (NDC), where we have worked on issues related to land use, forestry, ecosystem and biodiversity. During two more days of workshops, the topics will be around water resources, transportation, energy and livestock.

Including the actors of the sectors involved allows us to generate positive balances and get closer to the fulfillment of the project’s objective: enable Paraguay to implement its climate targets using the most appropriate technologies. This will be achieved by conducting a Technology Needs Assessment and Action Plan and providing the necessary guidance to prioritize technologies and address the country needs in climate change adaptation and mitigation.

If you want to know more about this project, click below: 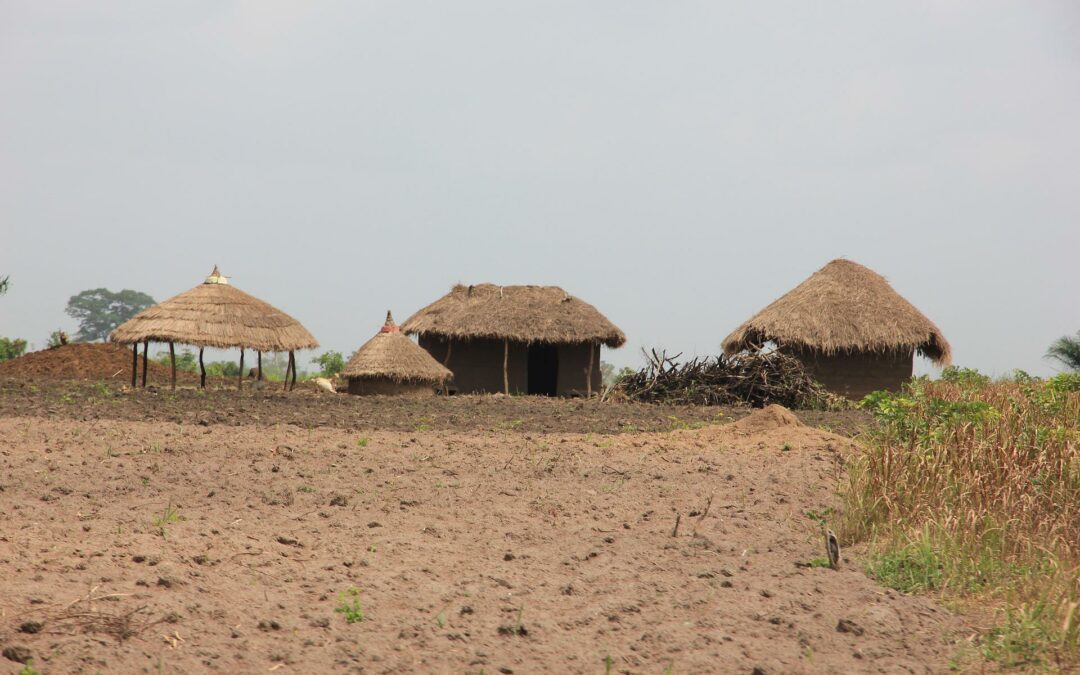 Through the signing of a strategic partnership with Climate Analytics and the Togolese local NGO Jeunes Verts, Oiko is working to provide a methodology that when applied will develop climate change adaptation and mitigation plans to one of the most climatically diverse but also fragile countries in the region.

“The challenge is clear. We musts reinvent the cities… the prospects of local development are an opportunity to act against poverty and vulnerability of the population” declared Aliou Dia, resident representative of UNDP in Togo during the launching of the project that aims at providing the West African nation with a methodology to create climate-smart communes.

The technical assistance provided by Oiko and its strategic partners guarantees reliable local experience and understanding of the local policy and municipal environment in Togo to carry out the necessary diagnosis and data collection process in constant interaction with relevant stakeholders. Oiko’s technical assistance will allow for the integration of energy, mobility, waste, vegetation cover and agricultural transformation into climate-smart communes across Togo, a country heavily menaced by climate risks and where agricultural activity represents 40% of its GDP and employs 70% of its population. Climate-smart communes will eventually improve the resilience of Togo’s communities and ecosystems.

Oiko at the Climate Week LAC

The Latin America and the Caribbean Climate Week 2022 was organized by the CTCN Climate Technology Center & Network in the Dominican Republic from July 18 to 22 with the aim of empowering stakeholders to drive climate action, address social inequalities and invest in optimal development for society and nature.

Oiko was invited to present two of our ongoing projects in Uruguay and Paraguay. These projects seek to identify and study climate technologies and circularity practices for the treatment and use of flows and materials in dairy farms, and do the guidance and technical support for a technology needs assessment and a technology action plan, respectively.

Lack of economic growth, food insecurity and environmental degradation are pressing challenges in the Far North Region of Cameroon, where OIKO is working along with the University of Maroua and the Center for Technology Network to provide sustainable and innovative solutions for the dairy sector in the communes of Wina and Petté.

During the last few years, the Far North Region of Cameroon has experienced less and more erratic rain, and higher average temperatures, phenomena that negatively impact the food security of its inhabitants. “Our main fear is that it is increasingly challenging to find pasture and our cows are not adapting to the constantly changing climate. We feed them appropriately, but their milk production keeps diminishing year after year,” affirms one of the several farmers, herdsmen, collectors, transformers, and producers of the dairy sector, many of them women, participating in the project.

Considered the poorest region in the country, with 74.3% of its population living under the poverty threshold, the Far North Region of Cameroon is part of the 2018 – 2030 United Nations Support Plan for the Sahel, which frames OIKO´s efforts and seeks to promote peace and sustainable growth through the pursuit of a series of priorities which include building resilience to climate change and decreasing natural resource scarcity, malnutrition, and food insecurity.

Cameroon is one of the countries with the lowest production and consumption of milk per capita in the world, milk production represents only 45% of its potential. Hence the opportunity “to develop an integrated Water-Energy-Livestock implementation plan for the dairy sector that adapts to the local patterns of development while taking into consideration Cameroon’s Far North cultural features and socio-economic challenges, where women and young children become actors of change,” as explains Nyore Nyore from the University of Maroua.

Storing energy generated by solar panels that could be used in the form of refrigeration units to boost the local dairy sector, while fighting the negative effects of climate change in northern Cameroon and working towards achieving food security in the region exemplifies OIKO’s commitment and embodies its principles.

We are currently carrying out the workshop to build the capacities of key national stakeholders to implement National awareness campaigns in Caribbean countries. This workshop is part of a project overseen by CCCCC on “Knowledge, Attitude, and Practice (KAP) survey related to Climate Variability and Change, and development of awareness strategy”. The project is funded by the EU under the Intra-ACP GCCA+ Alliance.

We thank the University of West indies St. Augustin Campus, and the Center for Excellence in Teaching and Learning (CETL) that is hosting and coordinating the event on their online platforms.

We currently have more than 100 people online registered for training. 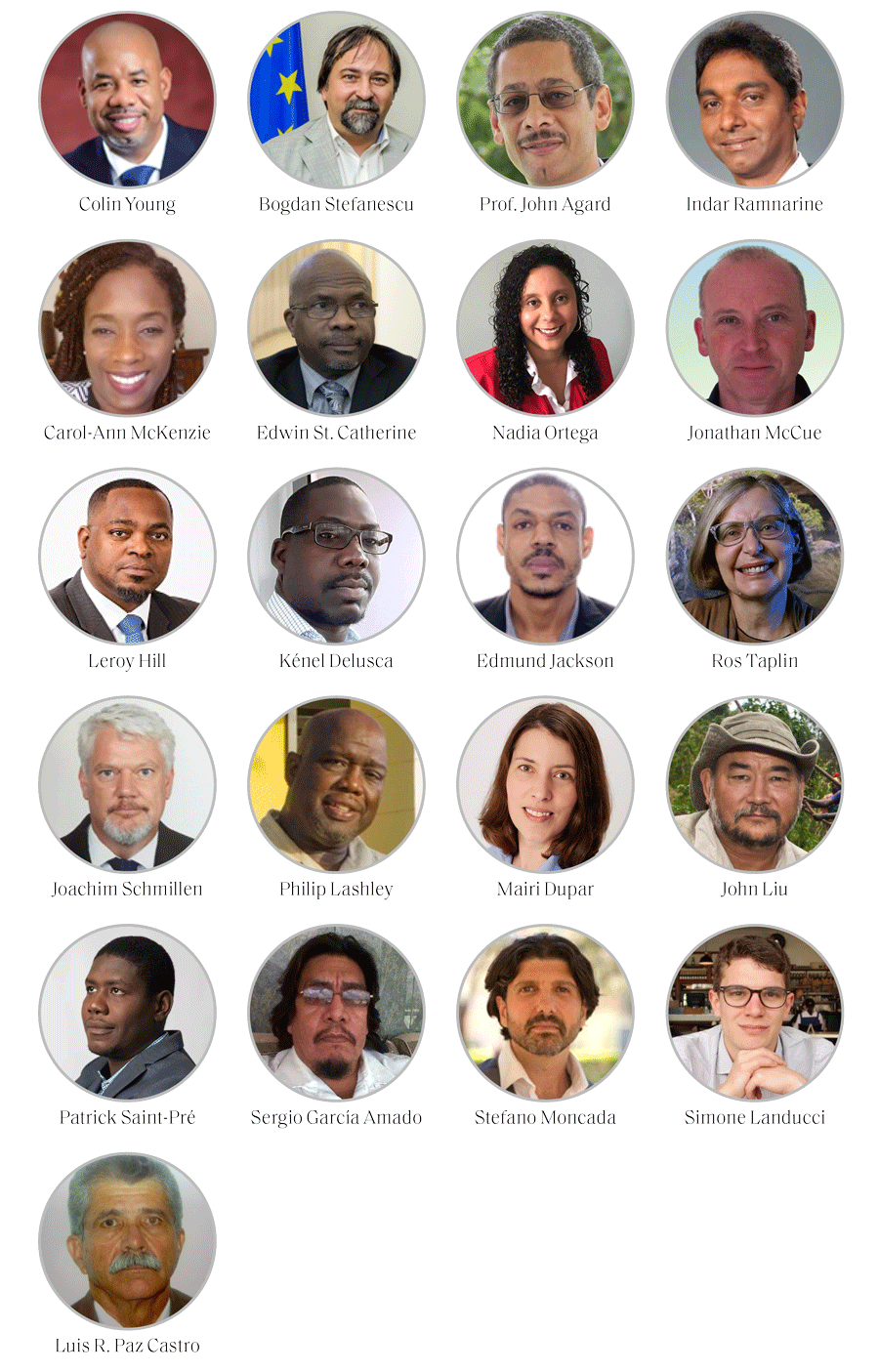 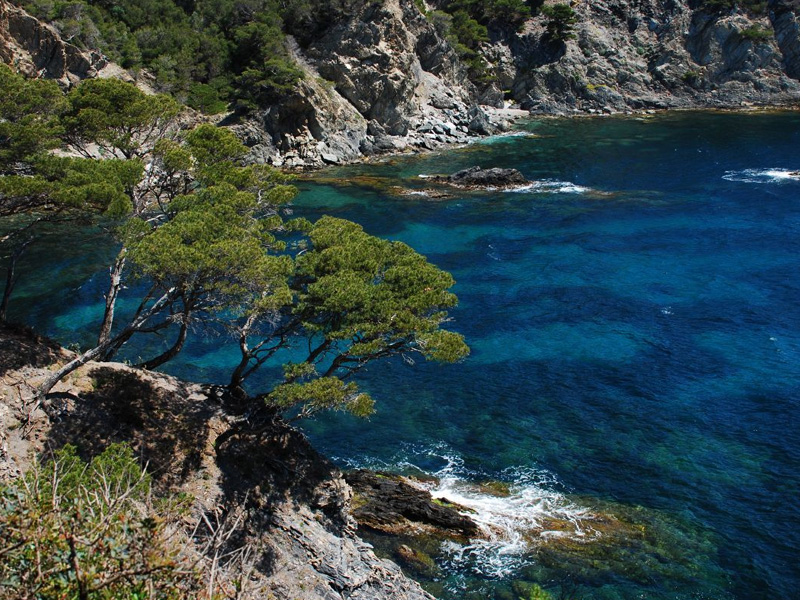 Oiko Logica in the Mediterranean with UNEP

The Mediterranean Sea region has become a climate change hotspot, meaning that it will suffer multiple stresses and systemic failures due to climate changes. That’s what emerged from the IPCC Fifth Assessment Report (AR5) released in 2013. It estimated an increase in surface mean air temperature of 2-4oC, 10-20% decreases in mean annual precipitation, increased risk of desertification, soil degradation, changes in species composition, etc., thus foreseeing serious losses on agricultural and forests production.

As a response, “The Convention for the Protection of the Marine Environment and the Coastal Region of the Mediterranean” (Barcelona Convention) released the Regional Climate Change Adaptation Framework (RCCAF) at the 19th Meeting of the Contracting Parties in February 2016, urging for action.

Under this framework, the project aims to support UNEP/MAP in the preparation of the project document for the project ‘Enhancing regional climate change adaptation in the Mediterranean Marine and Coastal Areas’, funded by the GEF-Special Climate Change Fund (SCCF).

OIKO LOGICA is extremely pleased to be supporting UNEP/MAP in this important project. In fact, our work will provide a great help to the Mediterranean Regions in facing the challenges of climate change adaptation, especially in the marine and coastal environment.