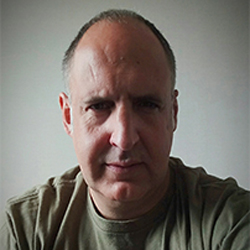 Juan graduated in Film and TV from New York University’s Tisch School of the Arts. He has a wide expertise covering all the areas of filmmaking, including production, editing and postproduction.

He has coordinated teams of professionals to create compelling films which narrate stories with an impact to a wide audience, moving people to take action and engaging them for change-making.

During his career at OIKO, he has used documentary film as an international language which contributes to dialogue and public debate, and which aims for a better understanding of our world.

His extensive filming experience covers remote and precarious places on the Planet, from Antarctica to the Himalayas, Northern and Western Africa, and the Highlands of Bolivia and Peru, including post-conflict environments under challenging and pressing circumstances for film shooting.

Juan combines this seasoned field expertise with the technical requirements of filmmaking on the ground in such extreme conditions (high altitudes, extreme weather, unstable environments, etc.), with the ability to work in different languages and multicultural environments.

Furthermore, he has developed through the use of webinars and new technologies a full methodology to assist and teach people to share their views and tell their own stories through digital video, finding the right balance between authenticity and quality audiovisual standards needed to reach a wide audience.

Working in projects for international development agencies (such as AECID, European Union, UNFPA, etc.) as well as directing his own productions, during his career, Juan S. Betancor has received numerous awards in relation to climate change and sustainable development, such as the “Terre des Hommes Award” for the Promotion of Economic, Social, and Cultural Rights, at the Human Rights International Film Festival of Paris, the Inconvenient Truth Award, at Cine-Eco Festival of Seia, Portugal, the Best Documentary Feature Award, at the African Film Festival of Dallas, and the Richard Leacock Award, at Las Palmas International Film Festival, Spain.